It is well documented and known that there is a gender bias on Wikipedia. In the Finnish Wikipedia only 19 % of the biography articles are about women.

On Tuesday 8.3., on the International Women’s Day the Finnish Wikipedians are organizing One hundred women to Wikipedia -event in the Helsinki University Library’s Kaisa-building. The aim is to write 100 new articles about women.

Staff of the university library and staff of ten cultural institutions (museums, archives and libraries) are joining the event to help people doing research on the women — searching and selecting references. The Wikipedians will help people in the actual writing, to add images and other media to the articles. The Finnish National Gallery’s Museum of Contemporary Art Kiasma will bring their expertise of organizing Wikipedia editing events.

To join, please fill in the registration form (sorry, that the form is only in Finnish but you can handle it!). The event is of course open for people speaking other languages than Finnish and you are very welcome to join regardless on in which 260 Wikipedias in different languages you are interested in to write and edit. 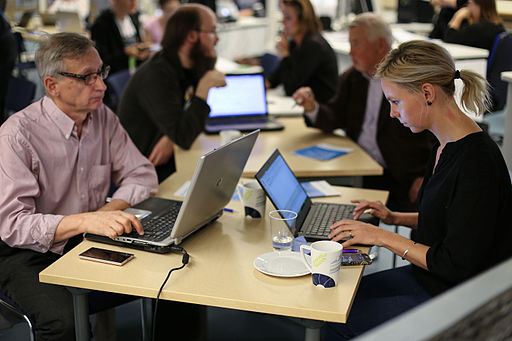 In 2011 Sue Garder wrote a blogs post with a list of nine reasons why women don’t edit Wikipedia. My hunch is that from those some of the obstacles have been removed. Here is my (educated) guess about the situation in Finland.

Since 2011 this has been improving a lot. Today, with the new editing user interface writing to Wikipedia is almost as easy as writing and email. So, if you can write and email you can edit Wikipedia.

2) Some women don’t edit Wikipedia because they are too busy.

This must be true in Finland, too. Studies show that women, most of them in the work life, too, do more household work than men. Women have less free time than men. On the other hand, it is know that in Finland, women are the heavy users of art and culture. They go to museums, theater and concerts much more than men. I do not see Wikipedia to be much different from these. To equalize the distribution of work in household is of course the first task. The second could be to show for women how editing Wikipedia is fun in a similar way as visiting museum and library or going to theater. It actually is!

4) Some women don’t edit Wikipedia because they are conflict-averse and don’t like Wikipedia’s sometimes-fighty culture.

I think this is true in the Finnish Wikipedia. The events like the one organized now in Helsinki are really important in here. When you see that the people editing the Wikipedia are real people it changes your perception: strangers become humans with feelings and emotions. They don’t need to become your friends. Just seeing that they are humans, just like you, often helps.

5) Some women don’t edit Wikipedia because the information they bring to Wikipedia is too likely to be reverted or deleted.

True and closely related to the point 4. Again, events are important. When you have the discussion with others about the topics you are planning to write to the Wikipedia you’ll get feedback early. This way you are not spending hours on something that will be then deleted.

6) Some women don’t edit Wikipedia because they find its overall atmosphere misogynist.

I would like to say that this is not true in the Finnish Wikipedia but I can be wrong. Again this is closely related to he point 4 and 5. Events help.

7) Some women find Wikipedia culture to be sexual in ways they find off-putting.

I haven’t heard this to be an issue in the Finnish Wikipedia. It would be good to know if it happens. Anyone?

8) Some women whose primary language has grammatical gender find being addressed by Wikipedia as male off-putting.

In the Finnish Wikipedia we are lucky with this. The language completely lacks grammatical gender. For instance, Finnish has only gender-neutral pronouns.

9) Some women don’t edit Wikipedia because social relationships and a welcoming tone are important to them, and Wikipedia offers fewer opportunities for that than other sites.

This is important. When you see a new editor in the Wikipedia. Say to them hi and welcome!